Dave Thomas is an American painter who lives and works in Eagle, Idaho and McCall, Idaho. He began painting at 15 years old, setting up his first studio in his parents’ vacant garage in Santa Cruz California. Making art changed his life. 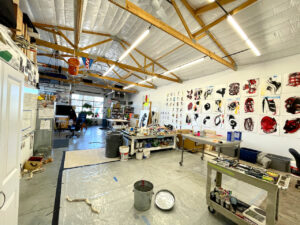 Thomas was born in Fresno, California in 1949 where he spent time in the Sierra Mountains with his family – half were cowboys and loggers. When his parents moved to Santa Cruz, California in 1961 he discovered surfing and as he says, “I spent my teenage years floating on a surfboard in the Pacific Ocean as well as sailing.” The ocean became an important influence in his life as an artist. “The freedom on a wave is very similar to making decisions on a canvas and you alone are responsible for both.” He spent two years as an art major at Cabrillo College in Aptos, California . 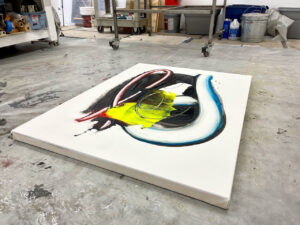 In 1970 Dave married Cindy who he met in high school. They moved to Los Angeles, California when he was accepted to California Institute of the Arts, earning his B.F.A. and M.F.A. over the following 4 years, graduating in 1974, the same year his son was born. He worked at Comsky Gallery in Beverly Hills, also one of the galleries that represented his work. He has shown and sold work in several galleries from the West to the East Coast and remains in several private collections.. 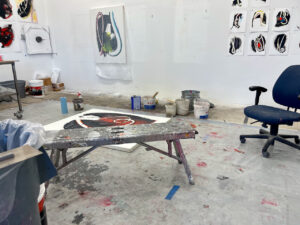 When his daughter was born in 1976, they moved to Bigfork, Montana for a different life with new challenges. The West with its open spaces and big skies became a major part of his paintings. The activity and energy of the city, and his connections to the art world, have kept him in communication and traveling to maintain the freshness and energy to go to his studio every day excited to make the next painting.

In 1995 Cindy and Dave moved to Boise, Idaho where they live today. In 2016 he built a studio in Eagle, Idaho and they split their time between Eagle and McCall where Dave maintains a studio for the summer months.